"The infinite beauty of God is constantly being discovered anew.” —St. Gregory of Nyssa

As part of an Order of the Eastern Church of Pontifical Right, the Sisters in Jesus, Lover of Humanity Province are formed in Its tradition, discipline, and spirituality, and by the writings of Saint Basil the Great and other Eastern Fathers.

Eastern Catholic tradition teaches that we are creatures by nature while becoming divine by grace and the notion of being human is based on “participation in God“. We have been created not as an autonomous or self-sufficient being; our very nature is truly itself only inasmuch as it exists “in God” or “in grace”. Grace therefore, gives us our “natural” development. The terms “nature” and “grace” express dynamic, living, and necessary relationship between God and persons, different by nature, but in communion with each other through God‘s energy, or grace. This energy, or grace, or “synergy” connotes God and woman/man working together to transform all of life. In essence, we become the human touch bringing the divine dimension to others.

In addition to this greater understanding of grace in the Eastern Church is a deep appreciation for the theological mystery of the Holy Trinity. The Trinity forms the very foundation of the spirituality of a member of the Eastern Catholic Church. In dealing with the question “who is God” one must first unravel the concept of the Trinity. Again, the key is relationship – the three persons of the Trinity teach us about living in community. 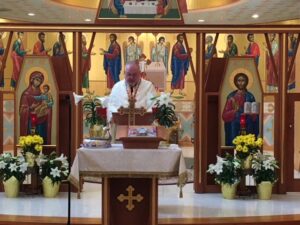 The Trinitarian model gives rise to thoughts of a Church pouring itself out in love for justice, peace, equality and the integrity of all creation. It speaks of global co-existence. All are included in this divine dance as equal partners in creative love. The koinonia (faith community) of the Church is therefore a model for all social interaction. In this model there is a profound respect for the world, for social and ecological issues, the need for reconciliation of enemies, the healing of ethnic rivalries, racism, and all forms of prejudices. Thus, the Church, itself transfigured by the Triune God will be an agent for the transformation into the koinonia and the People of God, into the ecclesia, the Church. The koinonia of the Church is therefore a model for all social interaction. It is in community that we come to recognize the love which comes to us from the Tri-Une God. It is through community that we come to faith and that we come to know how we should glorify God.

The blessing of the Eastern Catholic Church is the deep spiritual understanding of the beautiful Trinitarian concept of community and relationality. The Eastern Church teaches that there is no such thing as a solitary Christian. Each of us participates “in God” or “in grace”. We are sacred together. We are all called – women and men, husband and wives, teachers, physicians, farmers and workers, religious and clergy – to feed the hungry, to find shelter for the homeless, to comfort the downcast. We do not do it alone, but we do it together through the ecclesial community; for it is this community which is the bearer of our salvation. It is we who are the agents of the ecclesia and it is through the ecclesia that we gain the strength to be able to do all what we must. If we but cooperate, the presence of the Trinity leads us to theosis, a divinizing or deification, in which we become more and more like the image in whom we are made in baptism.

Our most important belief is that we are called ‘to become partakers of the divine nature’ (2 Peter 1:4), not just to be ‘saved’ from sin. We see ourselves as invited to live the very life of God, to become intimately related to God, to be physically united to Christ and to have the Holy Spirit dwell within us! The Church Fathers saw this as the reason for Christ’s coming: ‘God became man so that man might become God’ (St. Athanasius). 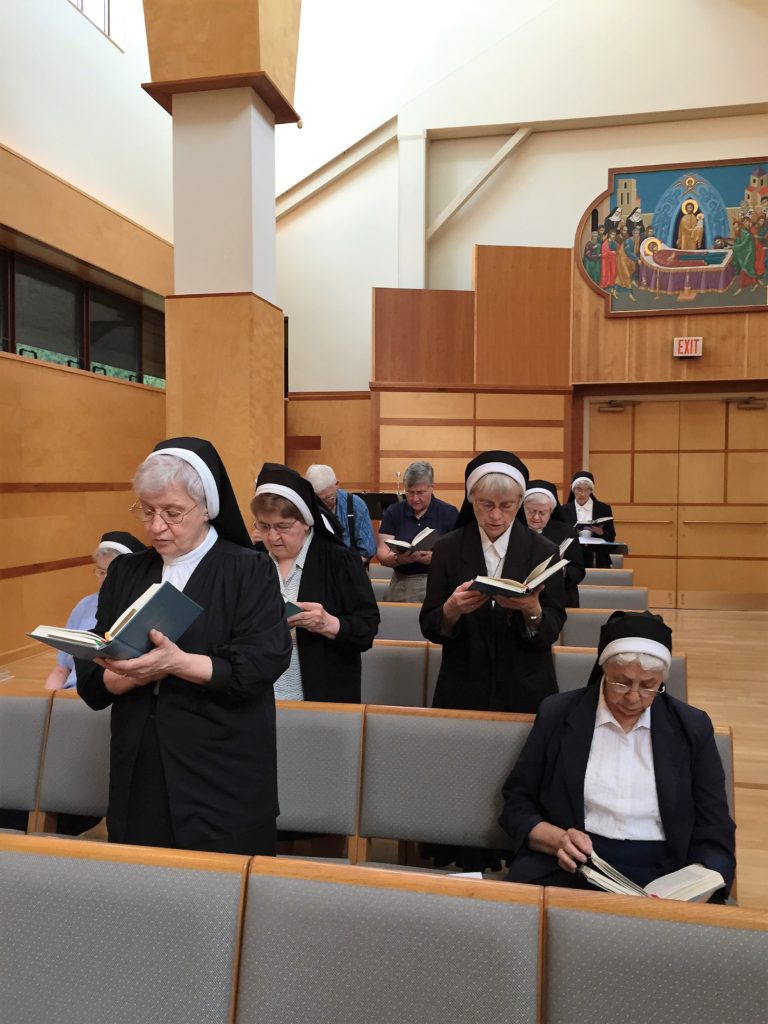 Our relationship commences in faith when we receive the Holy Mysteries. Through Baptism, we are made one with Christ as we reenact His burial and resurrection. Immediately after our Baptism, we receive the gift of the Holy Spirit, the first of “God’s gifts” (Romans 8:23) in Chrismation (confirmation). We also receive the Eucharist, by which we recognize that our mortal bodies are united to the Body and Blood of Christ as a token of the life to come, when we shall be united to Him in glory forever. In Eastern Christianity we see these Mysteries not as pious devotions, but as encounters with God. In faith , we believe the Mysteries produce the effect that they symbolize.

Our style of worship in the Eastern Churches is reflective of the presence of the risen Christ among us in glory and joy. All our senses take part in our worship to express this glory. We see icons, vestments, candles; we smell incense and perfumes; we hear continuous singing; we taste blessed foods and use physical gestures such as bowing, prostrating and crossing ourselves to express our wonder in the glory of God. Devotion to Mary, the Mother of God, is an integral part of Eastern Christianity.

In Eastern Catholic Spirituality we believe in our call to be divinized by union with God through the Holy Mysteries in both a ‘public’ life of worship, fellowship, service and a ‘secret’ life of prayer, fasting and sharing. And we believe in the need for the help of a spiritual guide or “elder” to assist us in the struggle as we journey together to transform our lives into the image we were graced to be in Baptism. 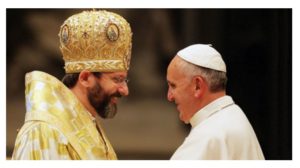 John Paul II often described the relationship between the Byzantine East and the Latin West using the analogy of the Church breathing with her two lungs.

The complimentary relationship between Eastern and Western Catholicism is evident in all aspects of the faith but is perhaps most obvious in liturgy. As Brother John Samaha, SM writes, “In Eastern Christianity, worship and liturgy are paramount. Liturgy is not seen as an action of the community. Liturgy is the procession or entrance into the eschatological reality of the Kingdom of God. It is the meeting place between this world and the Kingdom of God fully realized.”

Catechism of the Ukrainian Catholic Church: Christ Our Pascha

Synod of the Ukrainian Greek-Catholic Church