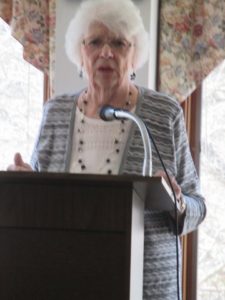 The relationship began many years ago. It was the 1960’s and Joan Crompton’s two young boys were ready for elementary school. At that time a resident of the Wissinoming section of Philadelphia, a chance meeting with another mother acquainted Joan with St. Josaphat School in nearby Tacony. Little Jerry and Gary were enrolled and entrusted to the care of the Sisters of the Order of St. Basil the Great and the dedicated lay teachers who staffed the school. And so began the Ukrainian-Irish connection that has endured for decades.

On Thursday, March 19, 2015, the Motherhouse Community—Sisters and staff—gathered for a farewell retirement luncheon to honor long-time employee, Joan Crompton, who has served the Basilian community in so many ways.

At St. Josaphat’s, Joan became an active member and then president of the St. Josaphat Parents Association, volunteering her services and eventually becoming secretary to the principal. In the 1970s, her reputation as a talented seamstress led the St. Basil Academy Principal at that time, Sister Dorothy Ann, to request that Joan teach a Home Economics course being offered as part of the curriculum.

The year 1994 found Joan entering a new phase of relationship with the Sisters at their Motherhouse, with duties in reception and in the Development Office. Throughout the years, known for her trustworthiness and capabilities, Joan’s responsibilities grew as she worked closely with the Motherhouse superior, all the while growing in endearment to all the resident Sisters.

“Joan, we value you for your devotion, your sense of responsibility and your trustworthiness,” said Sister Dorothy Ann Busowski, OSBM, Provincial Superior, at the farewell. “You are more than an employee in our eyes—you are co-minister sharing with us and with others our mission of hospitality. We pray that the all-loving God bless this leave-taking.”

Joan, who with her late husband Jerry, had been residents of Warminster, PA, will continue to live in a retirement community in that township, her children, grandchildren and great-grandchildren close-by. “The Sisters have been my family,” said Joan. “I feel this is just a vacation because I’ll be back now and then.”