The Sisters of the Order of Saint Basil the Great held their Eleventh General Chapter in Rome, Italy from July 8 to July 19, 2019. Forty-three international delegates representing 13 provinces, vice-provinces and delegatures of the Order of St. Basil the Great attended. The meetings were held at St. Josaphat Ukrainian Collegium in Rome, Italy. The theme of the Chapter was “New Wine in New Wineskins,” a theme adopted from the Vatican document “New Wine in New Wineskins: The Consecrated Life and Its Ongoing Challenges since Vatican II.” The Chapter motto was Jesus’ words from John 19: 28, “I thirst.”

The opening Divine Liturgy was held at St. Peter’s Basilica at the altar of St. Basil, where the body of St. Josaphat is enshrined. Divine Liturgy was celebrated by His Beatitude Sviatoslav Shevchuk and Bishop Dionysia Lachovich and several other priests. The Opening Ceremonies began with the singing of “Heavenly King” in Spanish, Slovak, Romanian, Ukrainian and English followed by an official opening of the Chapter by Mother Dia Stasiuk, OSBM. After approval of the Facilitator, Francis Heery, and Chapter personnel, Sr. Dorothy Ann Busowski was elected as Chapter Chairperson. A Chapter Steering Committee was then elected. Sr. Ihnatia Havrylyk, Sr. Maria Ignat, Sr. Susan Sisko, and Sr. Lucia Murashko were chosen to serve on this committee. Language groups were formed to discuss how the Sisters’ gifts might be transformed into “New Wine” for the Order.  Francis Heery from Faith and Praxis facilitated the Chapter.  On the second day of the General Chapter, the Sisters focused on “Desires, Dreams and Hopes” within the broader context of the General Chapter theme. A later discussion afforded time and opportunity for the Sisters to examine today’s challenges with the eyes of St. Basil the Great. 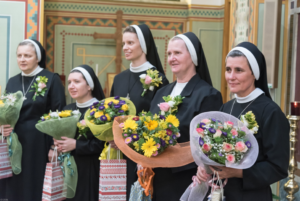 Reports by provincials and vice-provincials gave participants a deeper understanding of the lives, ministries and the problems encountered by each group. After the reports, the Sisters realized that it is their Basilian spirituality within diverse cultures that is the wealth of the Order. They rejoiced and jointly determined to address problems as a challenge to resolve creatively, by living a true gospel way of life as exemplified by the Holy Trinity.

Sisters began worked on a synthesis of various relevant topics, identifying five main issues that would serve as the main themes of the Chapter – communication, community, governance, finance and collaboration.   Proposals submitted by various Provinces were discussed and voted upon. These included various topics ranging from formation to communication to government to finance and other issues. The proposals were discussed in full plenary sessions. The discussions were intense but friendly.

Francis, the facilitator, prepared the delegates for the election process with a PowerPoint lesson on leadership styles in preparation for a day of discernment that would take place day before the election of the new General Superior. The day concluded with a recognition of the outgoing administration and acknowledgement of their six years of service.

In preparation for the election of the General Superior, the delegates started their reflections in Chapel by asking the Lord for a deeper communion with Him to help them discern His will. Afterwards they began the process of discerning who might be the best leader of the Order. Before lunch the Sisters again gathered in Chapel, where each Sister submitted her nomination on paper. After lunch the delegates acquainted themselves with the nominees and again retreated to listen to each other and the will of God.

On July 17, 2019, in the presence of Bishop Gregorgio Dimitri Gallaro of the Catholic Church of the Italian-Albanian Eparchy, the delegates elected a new General Superior of the Sisters of the Order of Saint Basil the Great. The newly elected General Superior is the 49-year-old Provincial of the Sisters of Saint Basil of the Immaculate Heart of Mary Province in Romania, Mother Marcela Runcan. 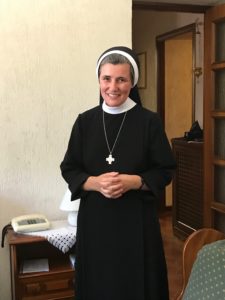 Solemn Vespers of St. Macrina, celebrated by Bishop Dionysius Lachovich, was sung by the Sisters of Jesus the Lover Humanity Province and Holy Trinity Province. Other attendees included the Basilian Fathers, the Sisters of St. Ann, Sister Servants of Mary Immaculate and the Franciscan Sisters of the Hearts of Jesus and Mary. Sister Michaelina Torre also participated in the evening’s activities. The Sisters of the new administration were honored with flowers and songs of blessings in many languages. A barbecue and celebration followed in the courtyard with the Sisters and guests enjoying lots of food, drink and joyful singing.

The eleventh and final day of the Chapter, July 19, 2019, fell on the Feast of St. Macrina. The Installation of the General Administration and closing ceremonies included prayers for and blessings on the new General Superior and her Council and a transfer of the Order’s seal and keys to the Generalate in Rome and to our hearts. Mother Marcela officially closed the XI General Chapter with words of unity and encouragement.