Sister Teodora Kopyn, OSBM grew up in the Carpathian region of Ukraine before entering the Order of St. Basil the Great in Lviv in 1997. She later trained as a social worker in Slovakia and was superior of a Basilian monastery in Mucachevo from 2005-2014. In 2014 she was missioned to the Jesus, Lover of Humanity Province and has lived at the Province Motherhouse on Fox Chase Road in Jenkintown, PA since then. 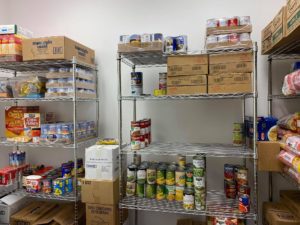 Sister Teodora completed coursework in English during her first several years in the United States. She also combined a passion for the poor with her professional background by volunteering at various Catholic apostolates, including St. Francis Inn. It was at the Franciscan ministry on Kensington Avenue that Sister Teodora found a second home helping to serve warm meals to the community. It was also her experience there that provided the inspiration to start something comparable at the Motherhouse.

Corporal works of mercy are fundamental to the Basilian Sisters’ spirit. The Order was founded by sibling-Saints Basil and Macrina in 4th century Asia Minor and from the beginning has furnished the poor with food and clothing. St. Basil famously said, “The bread which you do not use is the bread of the hungry; the garment hanging in your wardrobe is the garment of him who is naked; the shoes that you do not wear are the shoes of the one who is barefoot; the money that you keep locked away is the money of the poor…”

Today the Sisters of St. Basil are most closely associated with education though they have never ceased caring for those in need. For example, they ran orphanages in Ukraine and the United States for many years. Some of the girls who were raised by the Sisters even entered the Order later, as was the case for Sister Genevieve Kotyk, OSBM.

The COVID pandemic accelerated Sister Teodora’s plans for a new social ministry. When discussions with the Archeparchy revealed similar hopes on their part the decision was made to form two pantries that would complement each other. Good Samaritan Food Pantry at the Cathedral operates at a larger scale while St. Basil Support Ministry at the Basilian Motherhouse is geographically closer to the Ukrainian immigrant community in Far Northeast Philadelphia and Abington Township. Together the two will be doubly effective, sharing personnel, working knowledge, and Christ’s love for those on the margins.

St. Basil Support Ministry will distribute food each Friday, 10:00 AM – 12:00 PM. Volunteers are needed for various tasks throughout the week, those who may be interested can contact Sean McLaughlin: basilcenter@stbasils.com or (215) 780-1227.