Sister Mary Cecilia Jurasinski, 89, the president of Manor College for three decades, died Thursday, November 5, of complications from a stroke at the Motherhouse in Jenkintown. She had been struggling with health issues for a year and was under hospice care when she fell asleep in the Lord.

A native of Reading, Sister Cecilia was one of eight children born to Stanislaw and Ksenia Shelak Jurasinski and educated in schools affiliated with the Ukrainian Catholic Church. She taught fourth grade in the Reading public schools, enjoyed it, and had not intended to enter the convent, when her father died at age 57, she told catholicphilly.com. But in 1960, she entered the Sisters of the Order of St. Basil and made first profession in 1963. 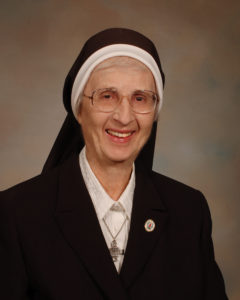 “The superiors at that time recognized that she possessed an inquisitive mind and a great capacity for leadership and learning,” Sister Dorothy Ann said. Sister Cecilia earned an associate degree at Manor College in 1956, a bachelor’s degree in elementary education from Immaculata University, and a master’s degree in American history from Villanova University. She earned 60 credits toward a Ph.D. in history at Temple University.

While still a novice in the 1960s, Sister Cecilia taught at St. Basil Academy. Later, she taught history and education at Manor College. Sister Cecilia was popular with students, who loved her courses in the history of Western civilization, United States history, Eastern European history, and women in America. “The emphasis was not so much on facts but analyzing the event and bringing it into contemporary learning — why it happened and what repercussions it has had up to the present day,” Sister Dorothy Ann said.

In 1976, Sister Cecilia became the college’s dean of students. In 1985, she became president, a post she held until 2015. Under her leadership, the college twice passed the rigorous accreditation review by the Middle States Commission on Higher Education, established the Ukrainian Heritage Studies Center, and expanded the holdings in the on-campus Basileiad Library.

Sister Cecilia realized that with a small student population and diminishing enrollment, the college had to offer students something special. “With changing times you can’t stand still, you have to keep moving up, you have to upgrade stagnant programs,” she told catholicphilly.com. She pointed to the state-of-the-art labs that train students as dental hygienists, and a 50-acre farm adjacent to the college that serves the veterinary technology program, as examples of upgrades unique to a Catholic college.

After retiring, she became director of the Ukrainian Heritage Studies Center. She was named outstanding educator for 1974-75 by the Outstanding Educators of America in Washington, and an outstanding graduate by Villanova University alumni in 1986.

Her intellectual interests included the study of the Byzantine liturgical tradition; the order’s founder, St. Basil the Great; the Basilian monastic tradition; and Ukrainian history. St. Basil, a theologian who lived from A.D. 329 to 379, was known for his care of the poor and underprivileged. He established guidelines for monastic life that focus on community ties, liturgical prayer, and manual labor. Sister Cecilia modeled her life after the Basilian spirit. “A woman of deep prayer and service, she truly believed in developing her God-given gifts throughout her life,” Sister Dorothy Ann said.

She also served on several committees that helped shape the wider order’s governance and spirit. “But mostly, Sister Cecilia will be remembered for her deep faith, her gentle loving ways, and her sense of humor,” Sister Dorothy Ann said. Sister Cecilia is survived by nieces and nephews and a large extended family.