January 9, 2016, was a blessed day as Sister Bohdonna Podney, OSBM, celebrated a century of living, loving, and giving. Hierarchy, clergy, Sisters, family, employees, and alumnae gathered to give thanks for the blessing of Sister Bohdonna in their lives. His Grace Metropolitan Archbishop Stefan Soroka was the main celebrant at the Divine Liturgy of thanksgiving. Concelebrating were Msgr. Peter Waslo, chaplain; Reverend Father Edward Higgins; and Father Roman Swerdan. Afterwards all the guests joined Sister Bohdonna in the dining room for a festive dinner, during which frequent wishes for “Many happy years!” echoed through the room. 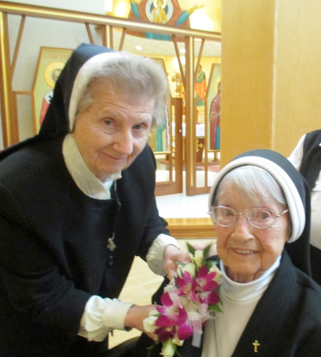 During her lifetime Sister Bohdonna has contributed much to the Order of the Sisters of Saint Basil the Great and has been a model to be respected and emulated as one who gave her life to something bigger than herself. Sister Bohdonna loved life and was always passionate about offering herself and her talents to the world. She served as teacher at Saint Basil Academy and as a professor at Manor College as well as working at various parishes in the United States. As provincial, Sister led her community through the changes in religious life as declared by Vatican II. For several years Sister Bohdonna resided in Mississauga, Canada, where she was commissioned by the General Superior to begin a Basilian Mission. Upon returning to the Motherhouse in Fox Chase, Pennsylvania, Sister retired from active duty on one front while immediately immersing herself in another; she taught herself to use the computer and began designing cards for all occasions while keeping in touch with others through e-mail. 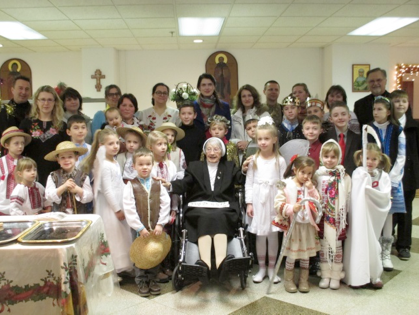 The greatest gift Sister Bohdonna possessed was that she has learned the secret of living life – instead of worrying about aging, she was always committed to living every moment with love, grace, and gratitude.

A fitting conclusion to the celebration was the visit of students from the Ukrainian Saturday School and Switlychka with their presentation of the Vertep. Sister’s face was beaming as she sang the familiar Ukrainian Christmas carols along with the children, no doubt remembering the many years of her involvement with such presentations in the past.

We congratulate Sister Bohdonna and pray for her. We also wish her health, happiness, and a longer life!