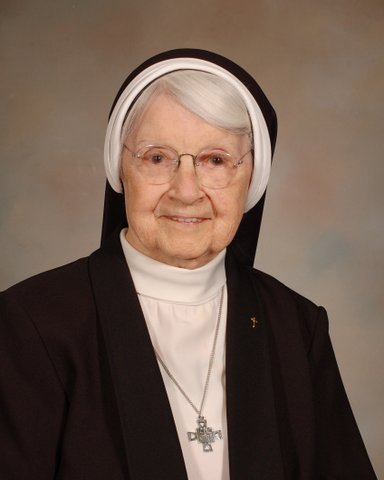 Born in Chicago, Illinois, on January 9, 1916, Bohdonna Stephanie Podney was the daughter of Nicholas and Tekla Romanowich (Chaikovsky) Podney. The family, which also included siblings John and Laverne, were parishioners of Chicago’s Saint Nicholas Cathedral.

Sister Bohdanna entered monastic life at the age of 17 (February 5, 1933), becoming a member of the community of the Sisters of the Order of Saint Basil the Great, Jesus, Lover of Humanity Province in Philadelphia. She made her first profession on August 28, 1935. Two years later, His Excellency Bishop Buchko received her final vows.

Soon after entering the Order, Sister Bohdanna embarked on an educational journey that was to shape the rest of her life and the lives of all those she lived with and worked with and taught. Almost immediately after entering the community, Sister enrolled at Rosemont College. The next step of her educational journey was the community’s House of Studies in Washington, D.C., where she attended the Catholic University of America and earned a BS in Chemistry. She followed this achievement by earning a teaching certification from Villanova University and then returned to Catholic University where she upgraded her BS in Chemistry to an MS in Chemistry. At a time when it was unusual for women to attend college at all, she was among the first in the community to pursue advanced doctoral studies (at Villanova University); her doctoral dissertation was entitled “Free Radicals from Perlargonia, Pentadecanoic and Octadeconis Anhydrides.” But her interests included artistic as well as intellectual challenges; Sr. Bohdonna was also a certified ceramics teacher, holding a degree in this genre from Montclair State College in New Jersey. In later years, she continued to expand her horizons by teaching herself about the intricacies of the internet and other modern-day media.

Sister Bohdonna served as Provincial Superior of the Jesus Lover of Humanity Province twice: a one-year term from 1954 to 1955 and a five-year term from 1970 to 1975. In 1981 she was appointed by then General Superior Sister Emilia Prokopic to serve as foundress of a new Basilian delegature in Mississauga, Canada. This was a long-term assignment (1981 to 2002) during which Sister Bohdonna found it prudent and expedient to become a citizen of Canada as well as a citizen of the United States, thus becoming one of the few people in either country to hold dual citizenship. Sister Bohdonna was also an active member of the Rosary Organization and the Ukrainian Foundation.

After a long illness, Sister Bohdonna Stephanie Podney, OSBM, fell asleep in the Lord on Tuesday, March 21, 2017, just two months after celebrating her 101th birthday. Visitation and Funeral Liturgy were held at the Holy Trinity Chapel on the grounds of the Motherhouse of the Sisters of St. Basil the Great in Fox Chase Manor, Pennsylvania. Internment followed at the Sisters’ cemetery. Predeceased by her parents, her brother John Podney, and her sister Laverne Podney Arnold, Sister Bohdonna is survived by numerous cousins, nieces, nephews, grandnieces, and grandnephews.

Among those who will miss this strong and remarkable woman are the Sisters of the Order of Saint Basil the Great, Jesus, Lover of Humanity Province, who worked with her and lived with her and prayed with her and learned from her. The eulogy delivered by Provincial Superior Sister Dorothy Ann Busowski, OSBM, underscored Sister Bohdonna’s diverse and far-reaching interests, her pioneering spirit, her eagerness to learn and teach new things and new concepts, her boundless appreciation for the universe and nature, an appreciation that propelled Sister Bohdonna to practice and teach conservation and respect for the earth we inhabit. Sr. Dorothy Ann also reminded those present of Sr. Bohdonna as a woman of foresight who, as Provincial Superior, mandated that all the Sisters under her charge should sign up for Social Security, a practice that was not universally adopted by other religious orders until much later. Sister Dorothy Ann also praised Sister Bohdonna as a fearless trailblazer “who led us through the challenges of Vatican II.” But the most telling comment in the eulogy focused not on the political nor pragmatic but rather on the human condition at its core: “You taught us the value of being cheerful and happy because you learned that unhappiness is determined not by our circumstances but by disposition.”