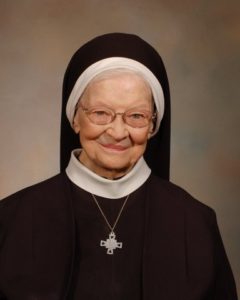 Sister Emellia, today we come to mourn your passing into new life, but we know deep down in our hearts that your memory will live forever in the many ways you have formed and fashioned our Order. From the very beginning, when you first entered the community, you were an innovator – a mover and a shaker. You had a passion for our Order and especially for your own province. And up until your recent illness, you were always attentive and interested in what was happening with both.

What a remarkable woman you were! What a most intriguing life you have led and what an extraordinary legacy you leave behind. When you first entered the Order, your superiors saw the potential in you and decided you were meant for higher education at a time when few women were even permitted to walk through the doors of a university. You were intellectually gifted, strong willed, generous, and quickly recognized as someone who would get things done. Perhaps this was something fostered when you were growing up in western Pennsylvania for it was there you learned to climb steep hills, never letting the heavy snowfalls deter you. And it was there, among a loving family of eight siblings, that you became accustomed to hard work and learned to be a trailblazer. You were tough stuff and that served you well in the many areas in which your religious life eventually took you.

As a member of our Order, you wore many hats and were known by many titles. You were called principal, provincial councilor, Mother General, General Councilor. But no matter where you served or under what title, you were a mentor to many and shaped many lives. You were a leader, a pathfinder, a trendsetter that pushed above and beyond the edges that others were often too timid to test. In the 1950s, when the Order was centralized in Rome you played a very important role. As Province Historian your tireless efforts in researching the history of our Province yielded the wonderful book Keepers of the Flame. As General Superior, you served at a very promising but difficult time in religious life—charged by the Church with overseeing and directing the renewal of religious life, you led each of the provinces in following the guidelines set forth by Vatican II. As a result, and after three drafts, a definitive Constitution was drawn up—one that has endured to this very day. As Superior General you visited Basilian Sisters throughout the world—in Ukraine, Hungary, Poland, Czechoslovakia, Yugoslavia, German, Italy, Argentina, Brazil, as well as in the more than forty Basilian convents in the United States, Canada, and Australia. It was during this time that you worked so diligently and devotedly to keep the doors open to our Sisters behind the Iron Curtain. And when that Iron Curtain finally came down, you were appointed Special Delegate to our Province in Ukraine, a title that came with a special assignment you undertook at the request of the Congregation for the Oriental Churches soon after the fall of communism.

No task was too much for you. You were always ready and available for whatever the community asked of you, but in undertaking all these heavy responsibilities you remained soft-spoken and always had a ready smile for everyone. No matter where you were and what work you were engaged in, your sensitivity and compassion drew others to you. Just looking around this Chapel today bears witness to that reality and underscores the indomitable presence that drew others to you. All of us, whether here or in the many countries you visited, have special memories of you. You remain very dear to your family, friends, former students, and your Sisters who served the Order of Saint Basil the Great around the world. Many sitting here today have been the recipients of your expansiveness in ministry, in friendship, and in love. All of us remember a person that could always be counted on, was always willing to be of assistance whether with time or talent or both. You never said no to a challenge set before you or to a request for help.

But as strong as you were and as hard as you fought to accomplish what needed doing, God saw you getting tired. So He put his arms around you and said, “Come to me.” You have served well, you have served diligently, and now you go to a well-deserved rest joining your mother Anna, your father Wasyl, and the siblings that have gone before you—Michael, Walter, Tony, John, Julie , Mary, and Helen.

In closing, I must mention one more very important responsibility you undertook, one that was assigned to you by Metropolitan emeritus Stephen Sulyk who appointed you to a starring role as Promoter for the Beatification of Metropolitan Andrew Sheptytsky. You worked long and tirelessly for this cause, and after many years and much effort, these endeavors have reaped the intended results. So when you meet up with His Grace in heaven, you can tell him in person that what you worked so hard to achieve will soon become a reality. It is somehow fitting and comforting that you will be with him when he is beatified.