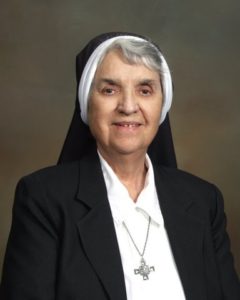 We gather today to remember Sister Josaphat and all she was and is to us. We are saddened by her leaving but strengthened by knowing that if death leaves a heartache no one can heal, love leaves a memory no one can steal. For those of us who have known and companioned her on her journey Sister was a person who authentically lived her religious life and had many gifts which she generously shared. I struggle in deciding what attributes I would like to bring forth in this eulogy – her artistic talents in sewing and embroidering vestments; creating Ukrainian Easter Eggs and weaving exquisite bead work. Or do I concentrate on her grasp of biblical and theological concepts and her ability to carry on discussion in either topic for hours? I would like to talk about all that and more. But to get to the real essence of Sister Josaphat one must know something of her background for that shaped the person she is.

There were, I am sure, places within that she kept locked away from even those most closest to herself. You see there was a sadness about Sister that was hard to penetrate probably because she did not like to dwell or talk about her past experiences. In her case there were things her secret heart buried and stayed locked away within. And yet we all know some of her story of how at the age of 18 she, along with her mother Maria and three sisters (Evdokia, Barbara and Anna), were forcefully removed from their home in Ukraine by the German army. With only a memory of their father Jacob and brother Michael, led by armed guards they walked 50 kilometers to a cattle railroad car for transport to a labor camp. They were given little food or water during the two week trip. After a week of processing they were settled in a labor camp in Augsburg, Germany where they lived under harsh conditions. In the camp Sister was forced to work in a factory that made engine parts for trains. Sister relates in her own words that she was forced to wash the parts in warm kerosene with her bare hands. Only years later it was determined that this exposure to chemicals had a profound effect on the many health conditions that afflicted her throughout her life. During this year in the labor camp, she wrote, they received only one meal a day, slept in a bunk house on infested wood chips and through the winter months often found their beds covered with snow. In 1945, after one year in the camp, they were liberated by the U.S. Armed Forces to a transit camp in Bremerhaven, Germany. In that short span of time Sister suffered more than one can imagine.

In 1949 she emigrated from Bremerhaven with her mother and three sisters eventually settling in New York City. This was not an easy transition as they found themselves in a strange land, with a strange language – but they survived and they thrived. Sister Josaphat worked at St. Joseph’s Hospital in Bronx, NY until she entered in 1954.

Once in community Sister Josaphat spent all of her monastic life in Fox Chase where, under the tutelage of Mother Euphemia, she learned the art of sewing and embroidering liturgical vestments. After the closing of the “ryznicia”, and desiring to be a contributing member in community, Sister began to use her other artistic talents turning to other pursuits. It was then that she began to develop her unique style of pysanky (Ukrainian Easter eggs) and gerdany (bead work), along with the stitching of beautiful Ukrainian embroidery. Sister would spend hours in her craft room, with her neck bent, drawing and waxing intricate designs on eggs or the stringing beads into fashionable necklaces and collars. Sandra Day O’Conner, Supreme Court Justice has been captured in pictures wearing on of Sister Josaphat’s necklaces adorning her robe.

The ryznicia”, her craft room and later her bedroom was a gathering place where one would stop to open one’s heart. There you were assured of homespun wisdom for one who had been through so much.

However, the most amazing thing about Sister Josaphat was her ability to carry on a biblical or theological conversation with the brightest of minds. Although she had no formal education, she was able to quote Scripture, give you a full discourse on theological issues, and relate the life of a saint or the meaning of a particular feast without hesitating. Her creative endeavors and her ability to discuss and speak of other worldly things was as natural as the breathing of her heart. She was able to dip her brush, figuratively, in her own soul, and paint her own nature into her picture of life.

All of us must leave something behind when we die. For some it is a child or a book or a painting or a house. It may be a garden planted. Something your hand has touched in some way and it is singed on your soul and has somewhere to go when you die. And when those who are left behind look at that tree or that flower you planted, or that pysanky or gerdany, you’re there. It doesn’t matter what you do, so long as you change something from the way it was before you touched it into something that’s like you after you take your hands away. It is all in the creating, the touching, the receiving that a person remains in our hearts and memories. We have been so touched by Sister Josaphat and her memory lives on in her eggs, her necklaces and most of all, a life well lived.

Let us leave today remembering that when you walk with another on the road of life, whether downhill or uphill. When you enjoy that person, when you lend a listening ear to her piecing sorrows, then words bloom on that road as flowers, and you carry those words with you and bring them to your home and they remain to live in your heart.

Yes, we grieve for you Sister Josaphat but are comforted knowing that living in hearts you leave behind – is not to die.