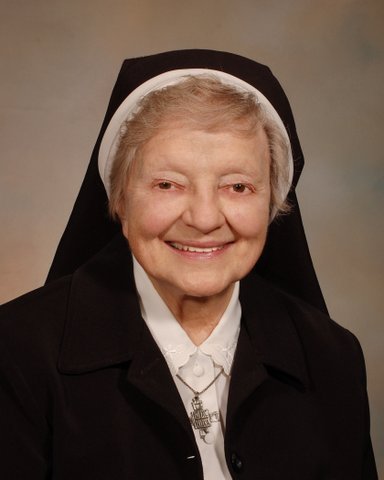 Sister Paula was baptized and chrismated at St. Nicholas Ukrainian Catholic Church, Passaic, NJ, and after the death of her parents, Anthony and Antoinette (Dobrowolska) Jacynyk, was raised by her aunt and uncle Anna and Peter Rybensky. Her high school years were spent at St. Basil Academy and soon after graduating in 1948, being deeply impressed and inspired by the Sisters and teachers, she entered the Order of the Sisters of St. Basil the Great.

After minor profession of vows in 1950, Sister Paula was missioned to teach at St. Nicholas School, Watervliet, NY, followed by teaching assignments at St. Nicholas School, Chicago, IL, SS. Peter and Paul, Auburn, NY, SS. Peter and Paul, Cohoes, NY, and St. Josaphat’s in Philadelphia, PA. In 1968, Sister Paula was called to the Motherhouse in Fox Chase where over the years she held leadership positions as novice directress, house superior, Provincial Vicar, councilor and secretary, registrar at Manor College, Provincial Renewal Team member, and mentor to young women from Ukraine who came to discern their vocation.

A Pascal Parastas for Sister Paula was held in the Basilian Motherhouse Chapel of the Most Holy Trinity, Tuesday evening, April 21. His Grace Metropolitan-Archbishop Stefan Soroka, assisted by Motherhouse Chaplain Rev. Peter Waslo and Rev. Edward Higgins, Pastor, Holy Ghost Byzantine Catholic Church, Philadelphia, spoke of Sister Paula’s faithfulness to her vocation and offered his personal condolences to Sister’s family and religious community. “This is the Week of the Myrrh-bearing Women and Sister Paula, in her own way, was a myrrh-bearer to many.”

At the funeral Liturgy, Wednesday, April 22, Msgr. Waslo reminded those present of the joyful message of the Resurrection and the assurance of a heavenly reunion with those who have gone before us.

Sister Paula’s smile and warm personality endeared her to many and in her eulogy, Provincial Superior Sister Dorothy Ann Busowski, OSBM, spoke of Sister Paula’s gift of touching others by her affability, sincerity, hospitality and talents. “All of us here today bear witness to this because all of us have been recipients of your smile and the warmth behind it.” Sister Dorothy Ann cited Sister Paula’s deep devotion to St. Therese of Lisieux for whom she was named, a devotion which she believed caused her to love God in her own “little way” and made her a loving and compassionate person.

“Dear Sister Paula,” continued Sister Dorothy Ann, “You left another message among your papers. Ever gracious to the end, you wrote, ‘In my eulogy please extend my love and prayers to all, and thanks.’”

Her memory is eternal!

Interment was in the monastery cemetery.